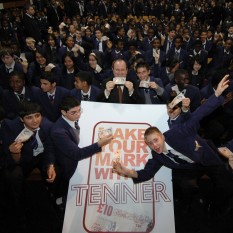 The winners of Make Your Mark with a Tenner 2007

Make Your Mark with a Tenner entries were judged on how much money was made from a single ten pound note, in just one month. This could be by an individual, or as a team. Where a team name is listed rather than an individual, the profit made is the average per tenner ‘invested’, rather than the overall profit.

The top 50 profit-making entries received a copy of Change the World for a Fiver and Richard Branson’s Screw It, Lets Do It, to inspire them to continue turning their ideas into reality. They also got the chance to put their questions to the Make Your Mark Connectors, a group of more than 100 inspirational entrepreneurs with contacts who can make things happen.

In addition the top three were awarded a cash fund which they can use to further their enterprises or to add to the good causes they’ve previously helped.

Fazila Dadabhoy made and sold doughnuts, and made a profit of 410. She donated the profits to Macmillan Cancer Research, Islamic Aid and Oxfam.

Richard Robson challenged others in his class to think of ways to raise as much money as they could for chosen charity of HCPT, and made a profit of 370. The profits were used to sponsor a special-needs child to go on a holiday to Lourdes in France.

Victoria Curl sold cakes, snacks and stationery to pupils at her school, and made a profit of 239.20. She donated money to Save the Children

The 2007 highlights brochure features profiles on the the top individual and group entries, as well as details of the special awards given for the most imaginative ventures, crazy ideas, eye-catching schemes and more!