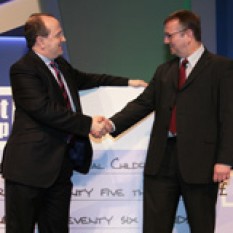 When marketing guru Andrew Reynolds announced one of his Entrepreneurs Bootcamp events at Wembley Conference Centre, the 2,500 seat event was sold out within just 48 hours raising over 300,000 in two days for Great Ormond Street Hospital Children’s Charity (GOSHCC). Mr Reynolds and 10 other marketing entrepreneurs from around the world, flew into London from as far as the USA and Australia giving their time and entrepreneurial training free to attendees. Their generous support further enhanced the fundraising efforts of the Bootcamp event.

Tim Johnson, Deputy Director Redevelopment Appeal at GOSHCC, received a cheque from Andrew Reynolds for the sum of 325,176 and praised the efforts of the entrepreneurs who took part. 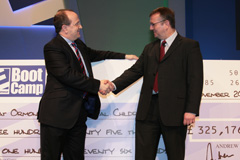 He said, This donation will enable the charity to fund a much needed new multi-bed treatment room in the new wing of the hospital, due to open next year.”

He added, We are currently trying to raise 150 million to redevelop the hospital and its facilities for the 21st century so contributions like this are hugely important to our future progress.

Andrew Reynolds said, It has been a great pleasure to raise and donate funds to such an important and worthwhile charity as GOSHCC. During the 48 hours that we were selling tickets for this event, I received many emails from our entrepreneurial students, several of whom had personal experience of the Hospital. One student told how the hospital removed a huge tumour the size of a rugby ball from his daughters abdomen last year. Another told of how both his son and daughter had received operations at the hospital, whilst one mother told of how her now bubbly 12 year old daughter at just one day old, was rushed to the hospital and was successfully nursed back to health for over a year by the GOSH team. We are therefore delighted to donate the entire ticket sales proceeds from the Entrepreneurs Bootcamp to this pioneering hospital and we look forward to working closely with the GOSH team again next year.