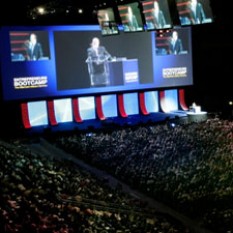 Beating major international conferences from major players such as IBM, Thomson Reuters  and  Ericsson, Andrew Reynolds Entrepreneurs Bootcamp won the Silver Award for Best UK and International Conference at the recent Eventia Awards held in London – the ‘Oscars’ of the events industry.

Moving  the Entrepreneurs Bootcamp event to The O2 Arena  was something of an upgrade for the Bootcamp team, with the event previously held at The Brighton Centre, BIC  and Wembley Conference Centre.

As well as winning two Awards this year for the event, the Entrepreneurs Bootcamp also broke some records. Firstly, Smyle, the event’s Production company ,met the many technical challenges of creating a 35m x 12 m projection canvas that formed the focal point of the conference stage. This was the largest indoor projection screen ever used in the UK and a first for the O2.

The Entrepreneurs Bootcamp was also the largest two day conference ever held at the iconic O2 Arena and was attended by around 8,000 delegates on both days. The resulting event – almost twice as large as previous years – pushed boundaries in terms of stage production too, which included moving walls and risers capable of smoothly revealing a Bentley Continental GT car, that organiser Andrew Reynolds gave away as a prize to raise money for the Make A Wish children’s charity. In all, the event raised over £720,000 for the Surrey based charity.

Receiving the Award, organiser Andrew Reynolds said “We are completely bowled over about winning such recognition amongst the cream of the events industry – not just here in the UK but internationally too. To be nominated in the first place, was an honour for us – but to actually receive this prestigious award means so much to the whole team involved in pulling off this record breaking event” 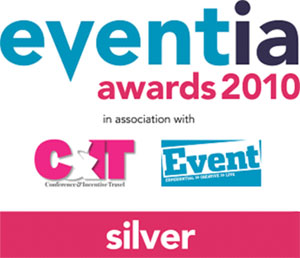