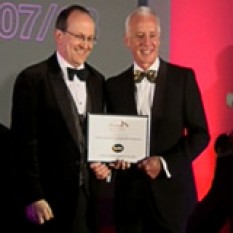 With a judging panel including representatives from Royal Bank of Scotland, Deloitte, Surrey Advertiser, Eagle Radio, The Institute of Customer Service, Surrey County Council, Surrey Economic Partnership, University College of Creative Arts and Business Link Surrey, Surrey Business Awards sought to unearth the most impressive companies and individuals in their categories – those who fulfilled their respective award criteria most proficiently and demonstrated performance and commitment above and beyond the usual. 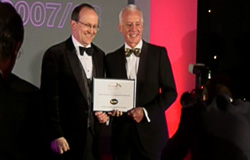 From entries submitted, the judges drew up a shortlist and visited each of the businesses short listed.

At the pinnacle of the evening’s Gala Award Ceremony held at the prestigious Sandown Park in Esher, four finalists for the coveted title “Business Person of the Year” were announced.

Paul Marcus of 96.4 Eagle Radio stood to announce the winner of this category for outstanding achievements by an individual – Andrew Reynolds

Standing to receive his award, local businessman Andrew Reynolds said “I am absolutely ‘gobsmacked’ to receive this Award as until a few weeks ago when the judges came calling, I had no idea I have been put forward for this.”

In secret, representatives from local and National Charities which Reynolds supports, including The Princes Trust, Great Ormond Street, Disability Initiative, Dial a Ride, Make a Wish Foundation and others had worked together to make a nomination submission, detailing the help and support that Reynolds had provided them with. “Andrew had no idea that he had been put forward for this Award and I hope it will now give him the recognition he so rightly deserves” said a spokesman for the group, many of whom attended the event to further show their support.

In an emotion filled acceptance speech, Andrew Reynolds said “I have a strong belief that as business people we should measure our effectiveness, not just by the profits we create but by how we use those profits to better the community in which we work and live”.