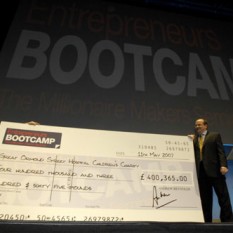 The 2008 Entrepreneurs Bootcamp held at the Brighton Centre last weekend not only attracted a record attendance of over 4,000 delegates but also raised over £468,000.00 for Make-A-Wish Foundation® UK.

Award Winning Marketer Andrew Reynolds organised the event and flew in 13 marketing entrepreneurs from Europe, Australia and the USA to give their time, entrepreneurial expertise and training free to all the attendees at the 3 day event. Their generous support further enhanced the fundraising efforts of the Bootcamp event. 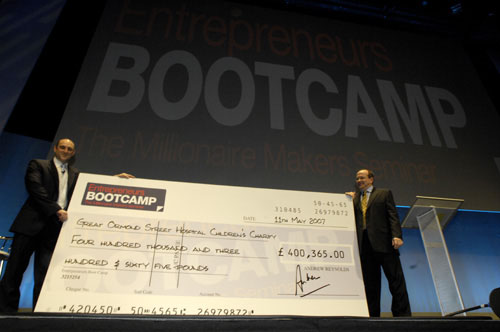 Neil Jones, Chief Executive of Make-A-Wish Foundation UK, received a cheque from Andrew Reynolds for the sum of £468,681.00, and with donations still coming in from delegates that figure will keep rising. In addition to the staggering amount raised by the event, Make-A-Wish Foundation are now able to claim a further £100,000.00 + in Gift Aid from the Government on top of the £468,000.00 raised – bringing the total raised to over £HALF A MILLION

Neil Jones said, “This fantastic sum raised has immediately started to fund over 100 wishes for children that Make-A-Wish Foundation want to help.”

For many families a Make-A-Wish wish can be the last happy memory they have of their child: having fun in a magical world, surrounded by family and friends.

Neil Jones added, “This is the single biggest donation ever raised at an event for Make-A-Wish Foundation UK and will go a long way in meeting our target of granting 1,000 wishes a year by 2010. I would like to personally thank all the delegates for their kind generosity and in particular thank Andrew Reynolds for organising the event and making this fundraising opportunity possible.”

Andrew Reynolds, who was recently appointed as a 21st Anniversary Ambassador for the Foundation said, “We are delighted to donate the entire ticket sales proceeds from the 2008 Entrepreneurs Bootcamp to Make-A-Wish Foundation UK and hope to continue to work with them in the future to not only raise awareness of what the foundation does but also to ultimately help them grant more wishes for more children.”

To read what some of the attendees to the conference had to say about the event, please read the testimonials.