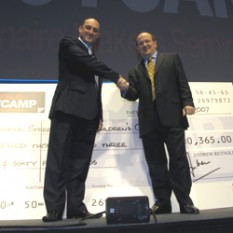 The long awaited follow up to the highly praised 2005 Entrepreneurs Bootcamp held at Wembley, which raised over £325,000 for charity and funded a brand new multi-bed treatment room in the new Octav Botnar Wing of Great Ormond Street Children’s Hospital, which was opened by HRH the Prince of Wales and the Duchess of Cornwall, took place a few weeks ago.

The May 2007 follow up event raised over £400,000 towards a new Cardiac Ward at the hospital through the 2007 Entrepreneurs Bootcamp.

Held at the BIC in Bournemouth and attended by over 3,500 people, organiser Andrew Reynolds donated 100% of the ticket sales proceeds to the childrens Charity… 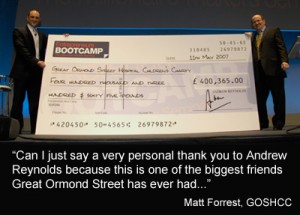 “This moves mountains, this sort of money. We need to raise at Great Ormond Street Childrens Hospital over £50Million every single year. The reason we need to do that is because we are a specialist hospital.”

“We’re not just treating children for general conditions; we’re treating kids from all over the UK and indeed abroad, for some of the rarest and most complex conditions. Some of those conditions can’t be treated elsewhere in the Country and we have those facilities under one roof – and there is a simple reason why we have those facilities under one roof and that’s because of people like Andrew Reynolds and people like you – because every penny that you have contributed this weekend at this conference is helping those children to get better it’s as simple as that. We cant express our thanks enough to you.”

The bottom line is that kids come into Great Ormond Street and for some of them, or indeed for a significant percentage of them, it is their last hope and thanks to people like yourself and to events like this, we get to send them home so we thank you very much indeed.

To read what some of the attendees to the conference had to say about the event, please read the Entrepreneurs Bootcamp testimonials.