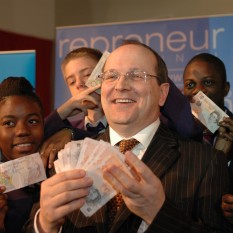 Earlier this year, Andrew Reynolds funded a brand new initiative the Make Your Mark with a Tenner campaign. Mr Reynolds provided 10,000 tenners to thousands of young people across the UK who were given a month to generate as much profit and social impact as they could.

Proving that they can be trusted and contrary to reports of UK kids being the worst in Europe – over £75,000 of the original £100,000 loan fund has already been returned. Profits have either been kept by the participants, donated to good causes or re-invested to continue with their idea. What’s more the winning 50 entries submitted by participating schools show:

The resounding message from students and teachers alike is that everybody taking part had discovered something valuable about the world of enterprise. Delivering social purpose was a big theme. Half of the 50 winning entries either specifically designed their ideas to benefit others or donated their profits, aiding good causes both at home and abroad.

For example, the Cathay Craftz’ business from Manchester Academy used the profits from their origami company to sponsor five students through secondary education at a South African partner school. Yidan Liu, one of the company’s directors said: “Cathay Craftz was fun because it was dead exciting and it gave us a chance to work with real businesses. We got some profit for ourselves but we also got to help students at a South African school, who don’t get the same opportunities as we do at Manchester Academy”.

A team from Holmer Green Senior school in High Wycombe ran a portfolio of money-making ideas including a treasure hunt and PS2 competition to raise £1,000 to rebuild a school in Kenya. Other social causes that benefited include MacMillan Cancer Research, Plan International, Mothers Against Guns and Great Ormond Street Hospital. The 50 whose ideas had the most social impact now have the opportunity to bid for 1,000 from the Big Boost fund, in order to develop their ideas further.

The top 50 profit making entries and the 50 who were judged to have made the most social impact are being rewarded with a copy of Change the World for a Fiver and Richard Branson’s Screw It, Let’s Do It, to inspire them to continue turning their ideas into reality. 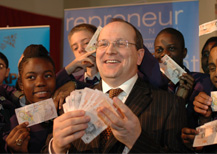 The teachers on hand to ensure students made the most of this opportunity were also inspired by the range of ideas their students produced. Phil Waterhouse, a teacher at Balcarras School in Kings, Gloucester, commented: “Make Your Mark with a Tenner really encapsulates what I believe Enterprise Education to be about – it gave students the confidence and opportunity to try and set up a mini-business within the month. It provided all the students with the inspiration to get involved and try to make their mark and the overwhelming majority of the 120 students taking part did this very successfully”.