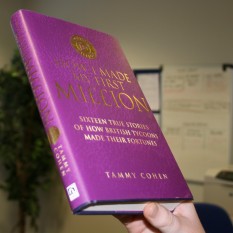 Andrew Reynolds featured in How I Made My First Million

Author of How I Made My First Million, Tammy Cohen, published by Metro and available on Amazon, features sixteen stories of how British Tycoons made their fortunes.

This insight into the start-up self-made millionaires begins:

Who wants to be a millionaire? We all do apparently. Only these days it’s not enough to have just one million, as being really comfortable requires having several million in the bank. With Britain now boasting more millionaires than ever before, it seems tantalisingly within reach. But how does one do it?

Judging by his father and grandfathers, 51-year-old entrepreneur Andrew Reynolds believes he was genetically predisposed to fail in business. So how did he break the hereditary mould..?

Well be reading this book for a start. In How I made my First Million, sixteen self made millionaires come clean about how they got filthy rich. There’s Andrew Reynolds who grew up in a one-bedroomed caravan, yet went on to make £30 Million working from home. Or Dominic McVey who made a fortune importing scooters when he was just 14 and now, aged 23, is head of a thriving cosmetics distribution company.

What the people in this book prove is that there’s no such thing as a typical millionaire. Some are middle aged, others are barely out of school. Some come from nothing with everything to prove, others reinvent themselves after otherwise indifferent careers. In fact, the only thing they have in common is ambition, motivation and the ability to think big.